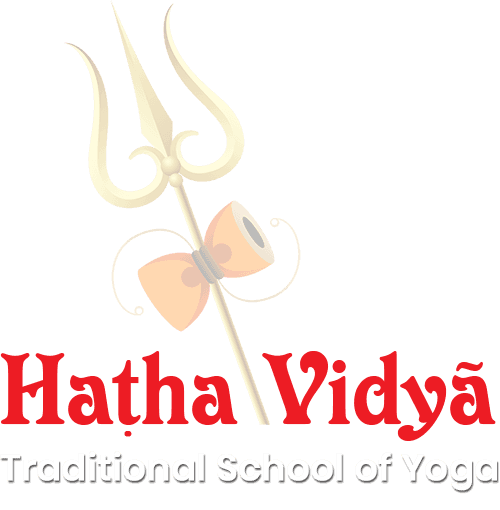 Hakāraḥ ki̇̅rtitaḥ sūryaśṭhakāraścandra ucyate
sūryācandramasoryogāddhaṭhyogo nigadyate
'Ha' signifies the Sun and 'Tha' signifies the Moon.
The union of Sun and Moon itself is called Hatha Yoga.

The word “Hatha Vidya” means the wisdom of Yoga. The term ‘Hatha’ in Sanskrit is composed of two syllables ‘ha’ and ‘tha’, ‘ha’ represents the sun or vital energy and ‘tha’ means the moon, representing the mental energy. By practicing Hatha Vidya, these two energy flows are synchronized leading to a balanced state of mind.

Hatha Vidya is the purest and the most traditional form of Yoga. It is the first step to improve one’s psycho physiological state (mind and body) and complete well being. Hatha Vidya empowers one to control the mind through body.

Beginning with easy asanas (postures) the body is made to undergo a thorough cleansing process based on the Shad Karma Kriyas (a six-fold cleansing process) to equip the body for a full-fledged practice of Kumbhaka Padhathi (Pranayama). Then with the use of Mudras (symbolic gestures) & Bandhas (a binding action involving pressure or contraction) the practitioner is fully prepared to explore Nadaanusandhan (pursuing inner and external sounds, a pure and meticulous practice of corporeal and spiritual bliss).

Hathavidya Yoga Center LLC was established in Dubai, UAE in 2012 which is currently operating from our Studio in Bur Dubai. We opened a second branch in Al Barsha, Dubai in 2020 and a third branch was opened in Al Nahda 2, Dubai in 2021.

Hatha Vidya has also started the operations in Johor Bahru, Malaysia from 2021.

Hatha Vidya functions as the representative office of Yoga Alliance International in GCC division since 2021.

Acharya Bala is the Founder and the Chairman of Hatha Vidya Gurukulam and Hatha Vidya Traditional Yoga in Dubai.

Acharya began his journey in Yoga - Vedanta Forest Academy, Sivananda Ashram, Rishikesh. He has travelled extensively in India in pursuit of exploring his way to seek the truth. Fortunately, he came across some of the eminent masters who imparted him the wisdom to experience the true essence of Yogic journey in Gurukula tradition. Throughout his journey he has associated himself with the traditional Yoga schools.

In 2006, he met his Guru H.H. Srividyamba Saraswathi of Tamil Nadu and received initiation into the Natha tradition. Under the tutelage of his Guru, in 2008, he established Hatha Vidya Gurukulum in Kerala, India in order to impart training to Yoga aspirants from all walks of life.

Acharya Bala is also the editor-in-chief of Thapobhoomi, the publication division of Hatha Vidya which publishes books, magazines and literature to provide useful insights on Yoga and Tantra. In order to augment the science of Yoga and related training, among school children, he has authored books on Yoga training for kids, adopting scientific methodology.

In 2021, Acharya Bala was appointed as the Director of Yoga Alliance International, GCC division.